Betsy Riot began with a simple message: FUCK THE NRA and its gunhumping knob-slurping minions. When the NRA and Russia installed President Tiny Hands von Pussy Grabber into office, we expanded our messaging to: FUCK FASCISM, because fascism is the tie that binds.

Which is why we were dismayed recently to learn that Everytown for Gun Safety (ET), the largest so-called “gun violence prevention” organization in America, has chosen a very different message: FASCISM, RACISM, POLICE BRUTALITY, GUNLICKING AND TRUMP ARE FUCKING AWESOME!

Everytown, it turns out, is demonstrating its courage and commitment to ending gun violence in America by co-funding and co-sponsoring the annual circle jerk of police brutality celebrants who comically call themselves the Fraternal Order of Police (FOP)! Everytown is lending their name to the event alongside the NRA, Beretta, and other killing-related tacticalwhateverthefuckwhogivesashit businesses–because the best way to fight gun violence is to give your money to fascists, roll over to show them your vulnerable crotch and hope they like you.

Our rage at the murder lobbyists now must become a big tent rage that includes Everytown and any other so-called “gun violence prevention group” that has made deliberate, calculated concessions to the NRA and its brown-shirted enablers at the state and federal levels, concessions most often paid for with the lives and bodies of black and brown youth in this country.

–The FOP defended Trump when he gave police a green light to stomp their jackboots all over due process and rough up arrestees.

–Google “Lautenberg Amendment”. FOP opposed that and sued to stop it.

–A scheduled speaker at this year’s FOPfest is none other than Betty Jo Shelby, the murderous cop who was recently acquitted for the killing of an unarmed black man, Terence Crutcher.

It is unconscionable that a so-called gun violence prevention organization is handing money (whose money? Yours?) alongside the NRA to sponsor an unapologetic fascism fan club. Crushing your moral compass and holding hands with the murderers of unarmed inner city children is no way to end gun violence in this country.

If you care about gun violence, we call on you to stop wasting your dollars by supporting fascism by proxy. Fuck the cowards of Everytown and donate instead to Black Lives Matter or a worthy social justice program of your choice. 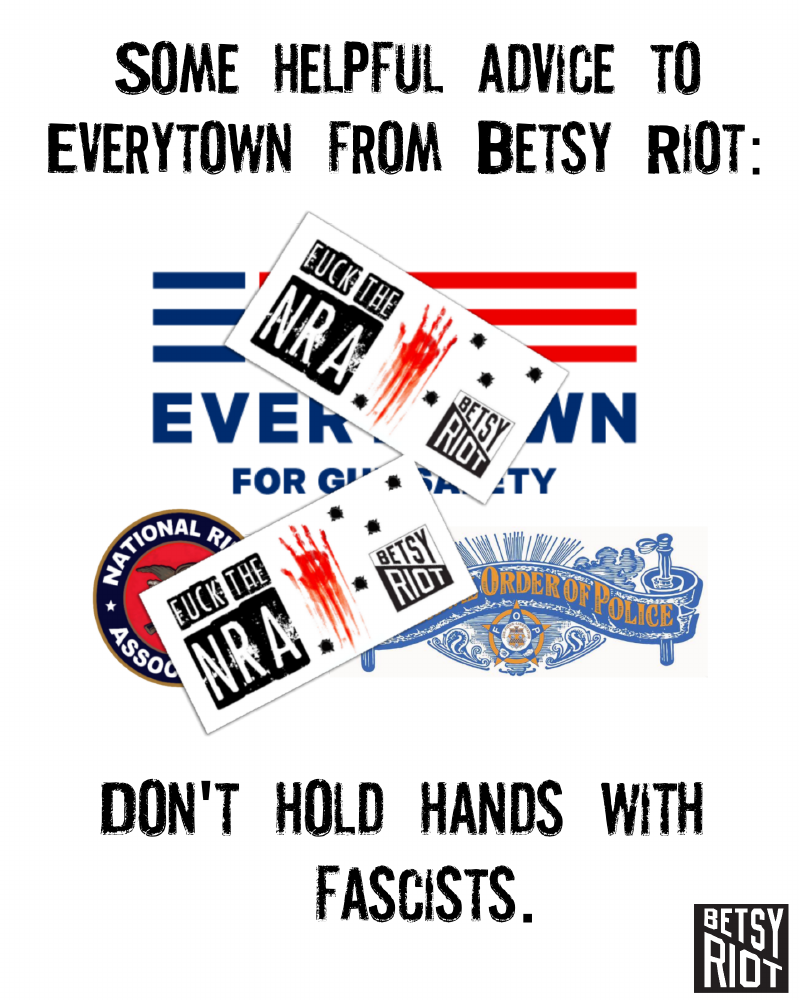