The United Way, whose mission is improving communities and advancing the common good, is unconscionably allowing a New Mexico UW office to purchase and raffle off 108 guns, including an AR15 like the one used to murder children at Sandy Hook. The United Way is helping to pour over a hundred guns into a state that has the sixth highest gun death rate for women and kids. So last night Betsies in at least twelve cities across the country took to United Way offices with signs and chalk to let them know that this is absolutely fucked up and no organization claiming to help women and kids should be profiting off of their deaths. No donations to United Way until their CEO Brian Gallagher grows a freaking pair and cancels this abomination. What were you thinking, United Way? 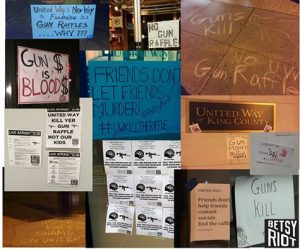 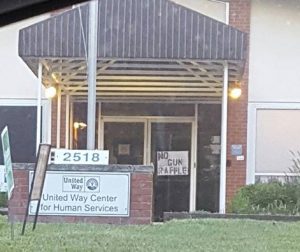