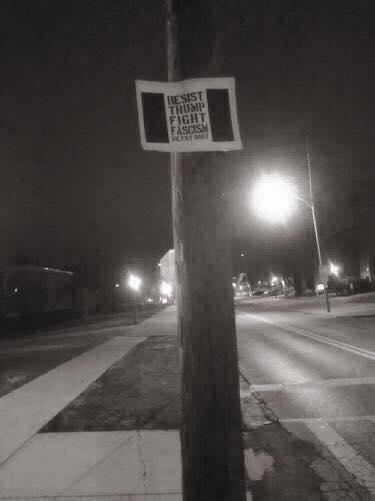 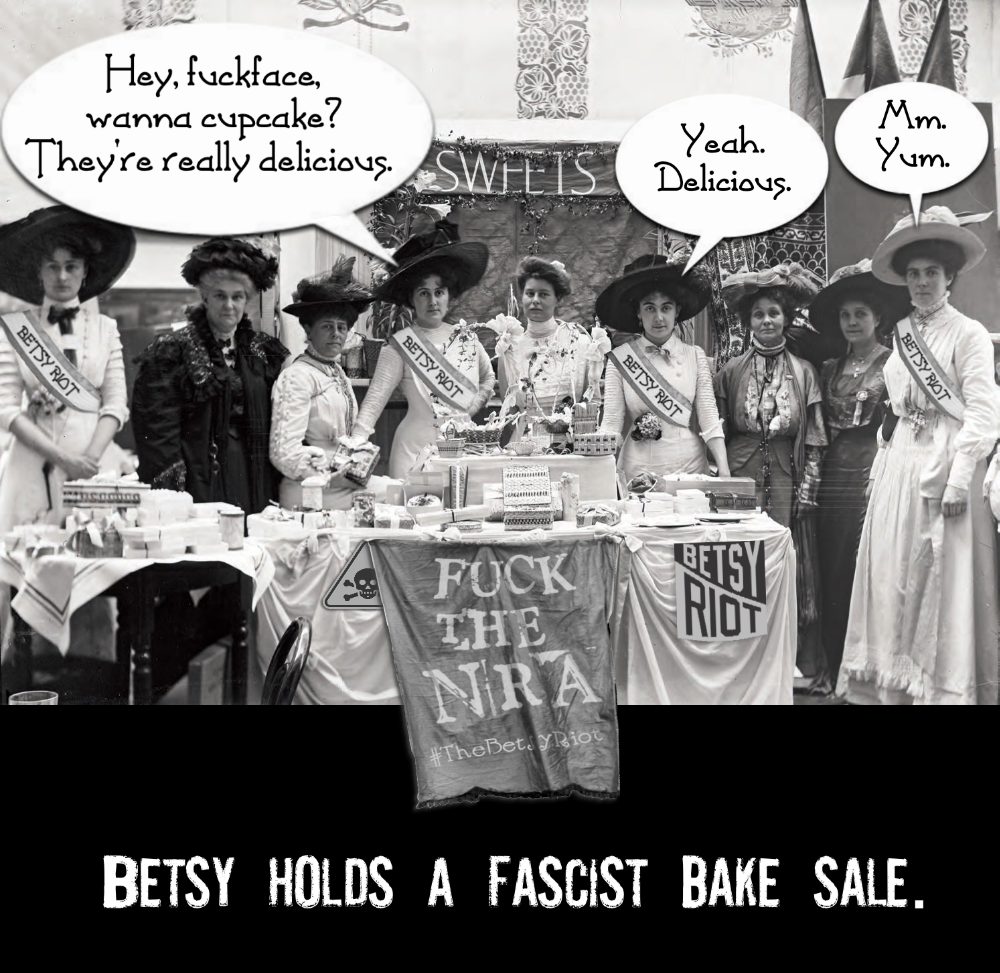 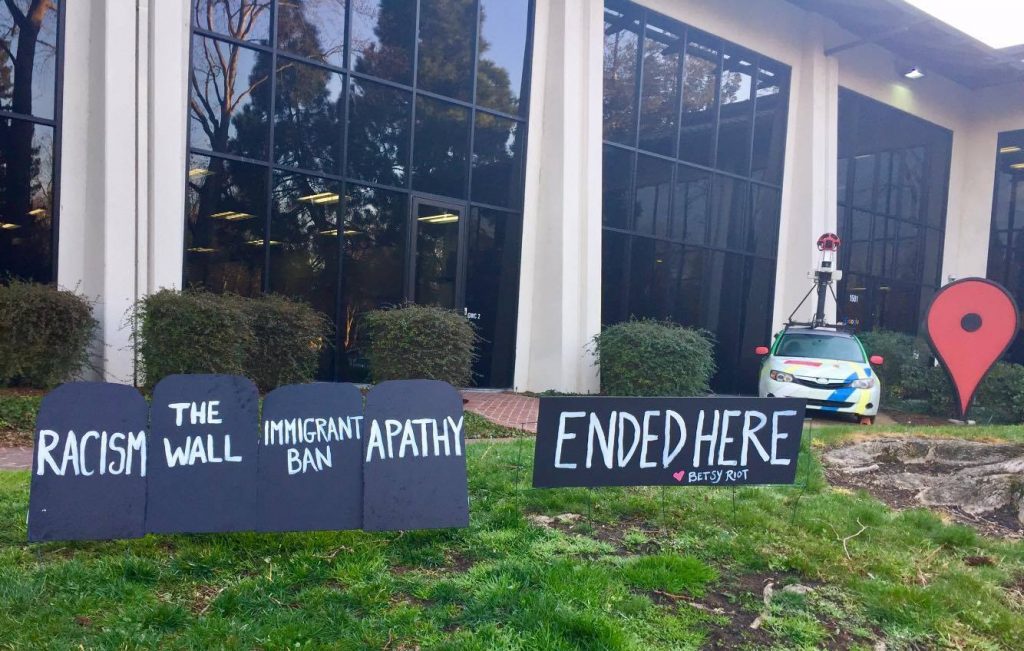 Gracious! We’ve spent so much time explaining how to BE a Betsy, we completely overlooked the equally important topic of how NOT to be a Betsy! We hope this meme proves helpful in expanding everyone’s understanding of the Betsy Way.

Part 5 of the instructional video series “How to Be a Betsy”, a Betsy Riot production.

In this episode: we learn how to create a homemade Betsy Banger tool for stapling “bandit signs” high up on telephone poles out of the reach of the angry, pundenda-scented, groping little hands of gunlicker Trumpizoids who might be compelled to rip them down in man-tearful, outraged hissyfits. All of the materials can be purchased at your local home improvement retail store–like, um, 84 Lumber, should one be near you.

NOTE: Bandit signs are more typically used by fast-buck real estate agents to exploit poor people. As such, they are considered a public nuisance by many communities. Be conscious of the laws in your area. Penalties vary. But so does the give-a-shit factor of code enforcers. 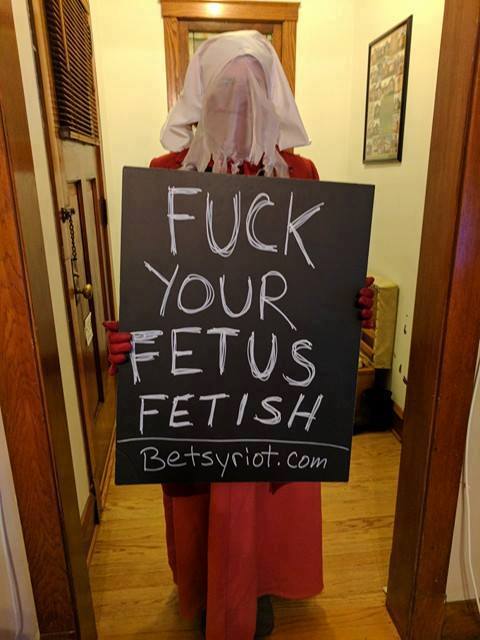 Last night in Lincoln, Nebraska, a riot of 15 betsies took to the streets of downtown in response to Senators Ben Sasse’s and Deb Fischer’s pathetic licking of Trump’s boot. Nebraska senators are dutiful fascists fucking over Nebraska children by helping Trump to destroy public education for corporate gain and by remaining silent or issuing simpering lukewarm statements on Trump’s executive actions to oppress immigrants and refugees.

One of the Lincoln Betsies said: “Look how quickly the ‘Never Trump’ Ben Sasse has lined up to genuflect to his master. We gathered to condemn the disgusting moral cowardice and fascist cooperation of both Sasse and Fischer. History does not look kindly on fascist toadies, and the fact that Sasse led a Nebraska university and Fischer’s mother was a teacher makes their approval of DeVos all the more pathetic and outrageous.”

We belatedly checked our message box today and found this press release from yesterday waiting for us. It’s from the Nebraska Betsies!

If you’re in Lincoln and going to their local galley hop downtown–look them up! They’ll be out and about!

(Lincoln, Nebraska)— Members of the “neo-suffragette punk patriot” protest group Betsy Riot will hold a street demonstration tomorrow night in downtown Lincoln during the monthly First Friday gallery hop in response to what the group says is the hypocritical “aiding and abetting” of the Trump agenda by Nebraska Senators Ben Sasse and Deb Fischer.

Wearing veiled Victorian widow’s garments as a symbol of mourning, and chanting protest slogans while carrying signs, the group will walk along the sidewalks of the downtown district and voice their opposition to Sasse and Fischer . The group has protested in similar fashion at past public events, including a lecture given by gun rights advocate John Lott, the annual lighting of the Capitol Christmas tree by Gov. Ricketts, and, most recently, the Women’s March in Omaha. At times the group has chanted noisily and epithetically, while at other times simply stood “in silent vigil” with the intent to shame, said a group spokesperson who identified herself only as “Betsy.”

On Friday, she said, the group will be “making some fucking noise.”

“We are outraged at the swift destruction of our beloved country by a psychotic, narcissistic Russian tool and his alcoholic, wife-beating white supremacist advisor,” Betsy said, referring to President Donald J. Trump and chief White House advisor Steve Bannon, respectively.

“Trump is a fucking asshole,” she added. “He wants to screw over Nebraska’s children by destroying their public education for the sake of corporate gain, and the only thing he seems interested in teaching Nebraska’s children, based on his executive actions, is how to hate Muslims and Mexicans, how to finger-fuck women, and how to take a giant shit on the environment.

“The Trump-Bannon agenda is corrupt, idiotic and fascistic,” she aded, “and our two fuckwad senators, Sasse and Fischer, are aiding and abetting that agenda.”

In recent weeks, the Trump Administration has come under fire for an aggressive flurry of executive orders that include a ban on immigrants and refugees from Muslim countries, as well as the appointment of cabinet heads who oppose the departments they are meant to lead, most notably Department of Education nominee Betsy DeVos, a billionaire proponent of vouchers and charter schools whose poor performance before Senate hearings and conflicts of interest have been called “troubling” by her critics.

By supporting DeVos, Senators Sasse and Fisher are failing the people of Nebraska, according to Betsy.

“Trump has nominated an absolute moron to head up our public education,” she added. “The fact that Senator Sasse led a Nebraska university and Senator Fischer’s mother was a teacher makes their approval of DeVos all the more pathetic and outrageous—particularly Ben Sasse, who spent two years beating the ‘Never Trump’ drum and who has now dropped to his knees to genuflect and lick the boot of his fascist master. That is why Betsy Riot is protesting Friday night—to condemn the disgusting, unbelievably fucked-up moral cowardice and debased, ass-eating fascist complicity of Sasse and Fischer. We hope others will join us.”

First Friday begins at 7:00 in the Haymarket and downtown area off Lincoln. Temperatures are expected to be in the 30s.

Betsy Riot is a decentralized neo-suffgagette punk patriot movement dedicated to nonviolent unapologetic resistance to Trump, the NRA, and the white nationalist movement.

Betsy took her kid to the pediatrician and contributed some stickers to the reward basket. 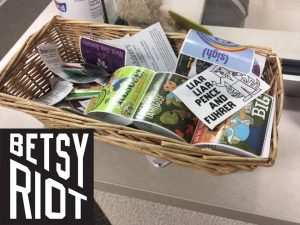 Betsy has been visiting the greeting card sections of stores and donating the valentines our country needs. 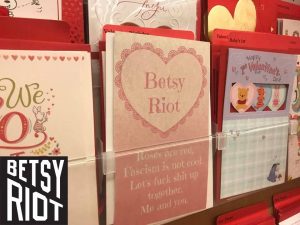