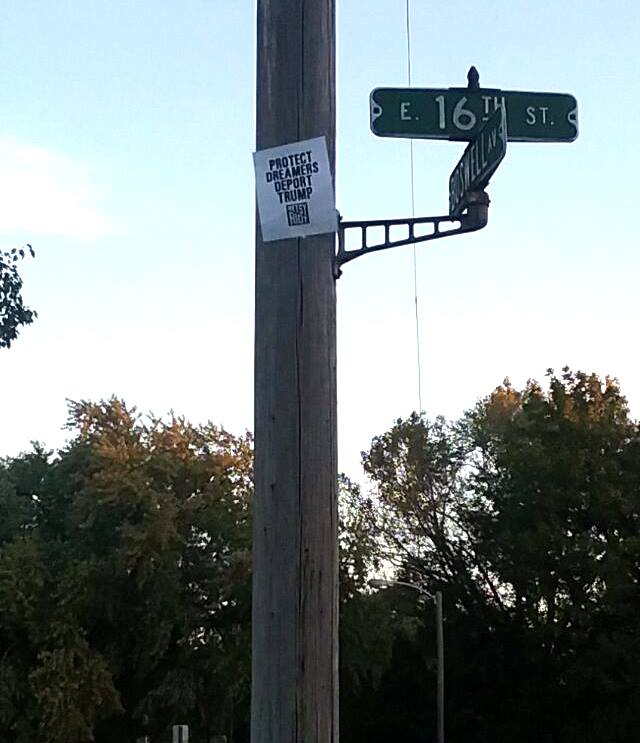 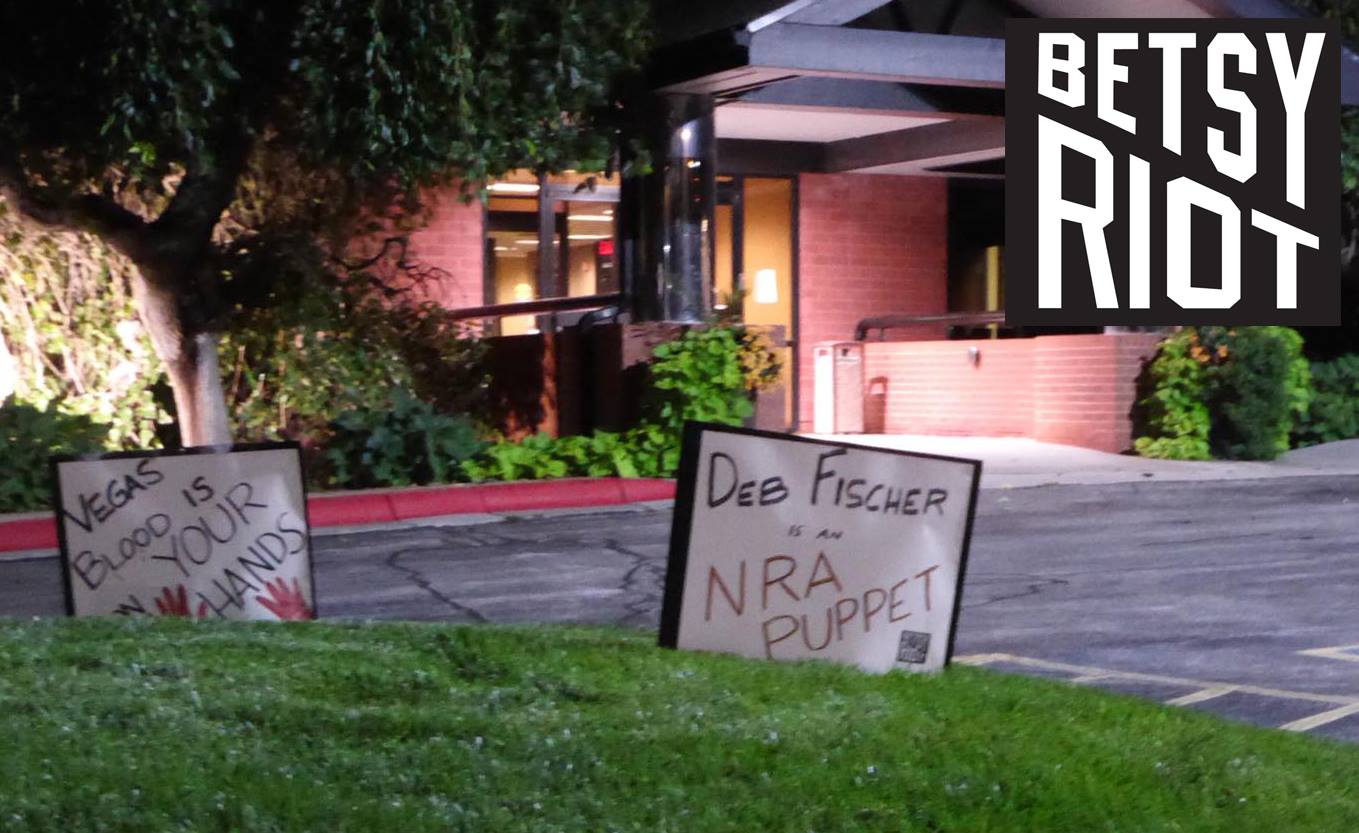 Oligarch Betsy DeVos, Secretary of Education Dismantlement, visited Lincoln, Nebraska last week to survey how the community is caring for its young riffraff. Unable to find a suitable workhouse where the urchins could be put to a profitable task such as picking oakum or pasting labels on Amway bottles, she was forced to dismount from her carriage at one of the city’s public schools, this one with a focus on something called “science,” which Mme DeVos knows must be trampled out if we are to properly train young workers to serve God and Koch.

The Betsy Riot, feeling rather contrary to Mme DeVos’s designs to fuck up the bedrock of a healthy democracy and also not particularly caring for her awful positions on LGBTQIA youth, special needs kids, and sexual assault, stood in the blistering heat to protest the oligarch’s presence, which they suspect was timed to coincide with their oligarch governor’s efforts to establish charter schools in the state. The Betsies were joined by hundreds of other Lincoln residents who value their children and their fine schools more than kleptocracy, one of whom stopped to get a photo (shared here) with the Betsies.

While the alt-right vulture politicians of Nebraska suited up for their weekly display of faux-godliness, OMAHA Betsy said “Let there be banners” and there were banners. And Omahans saw the banners, and saw that they were good.
~ Betsy 09:03

TL;DR: The Cheeto-hued One and his minions are fascist pieces of shit. 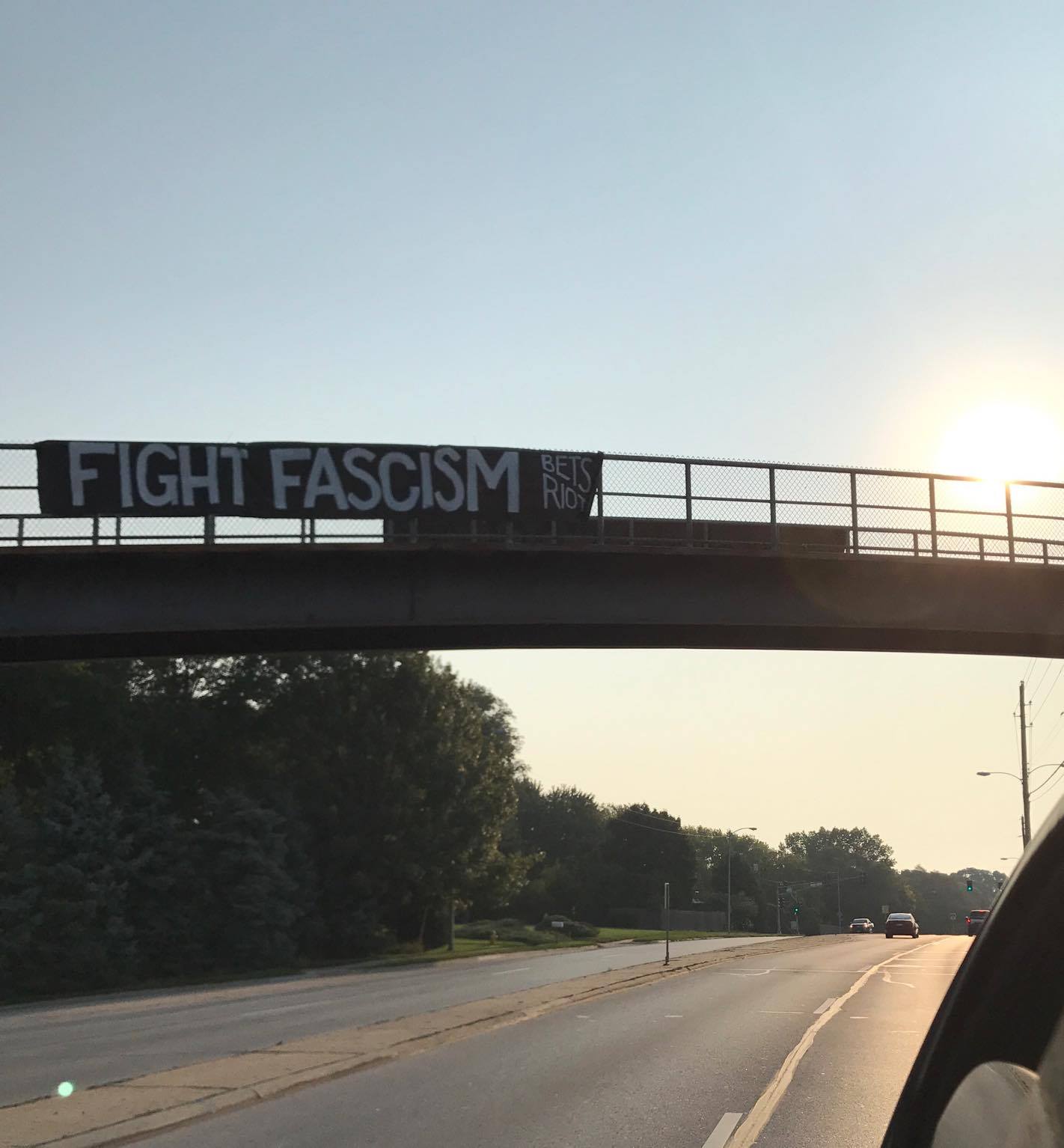 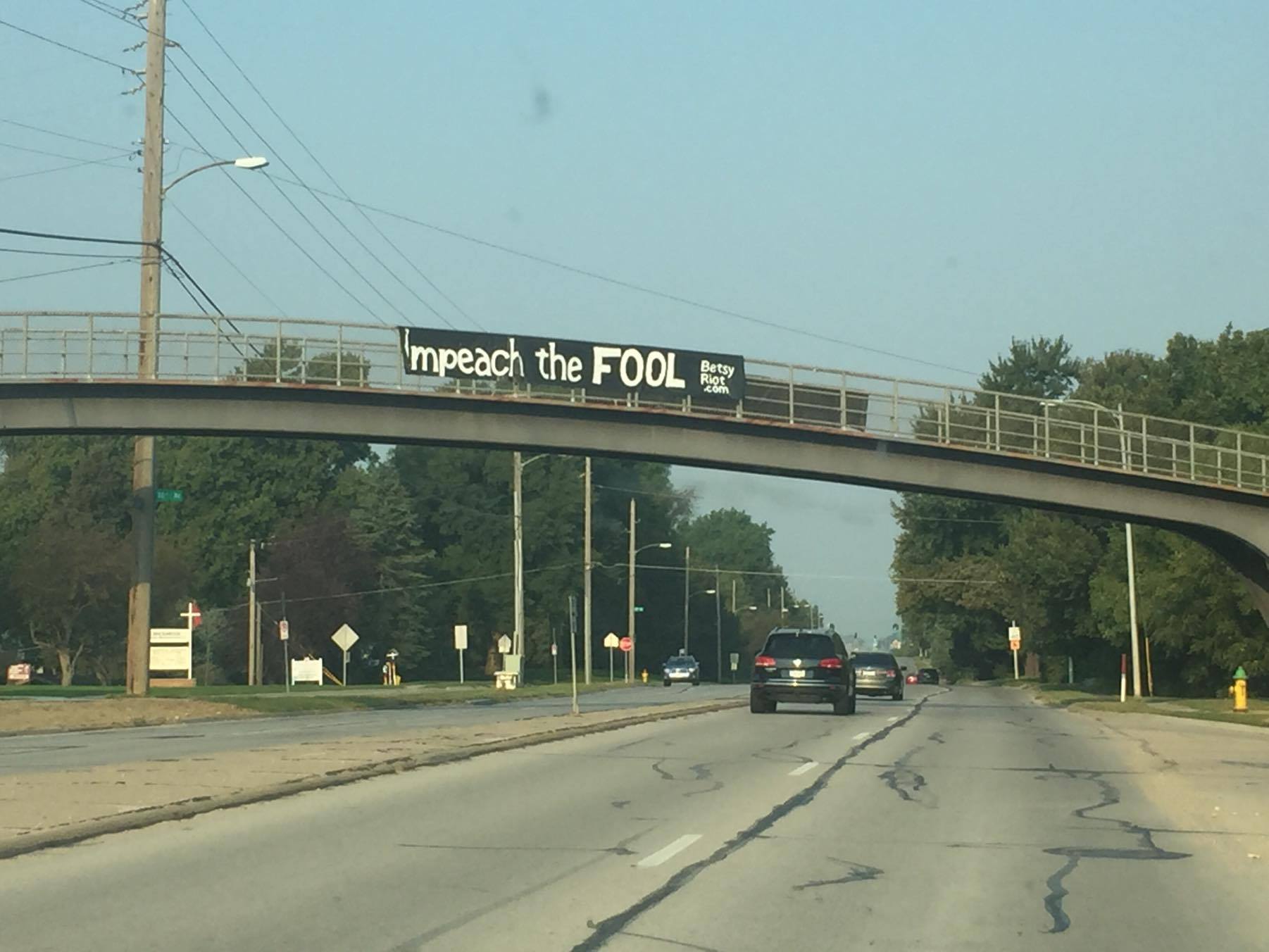 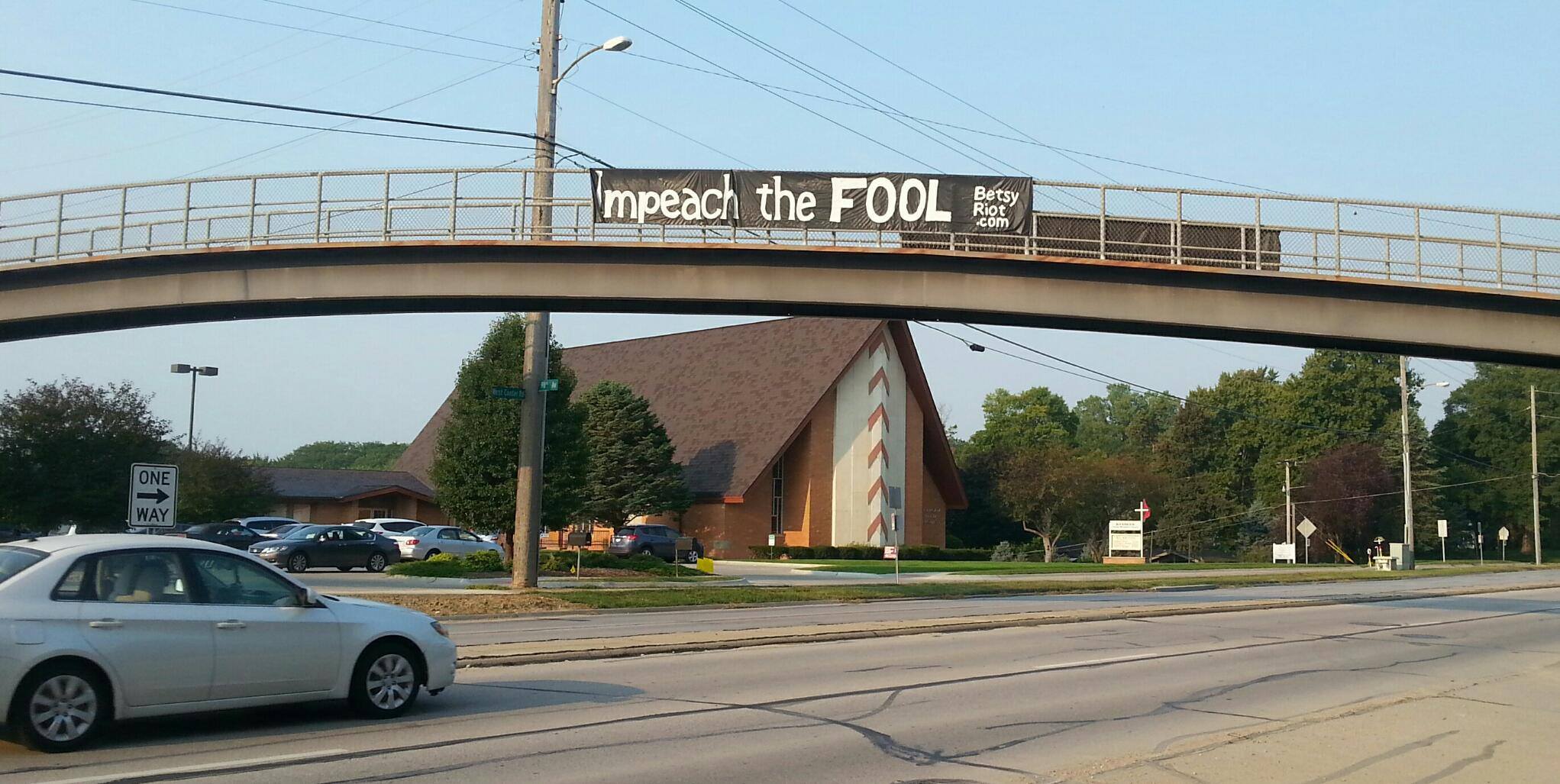 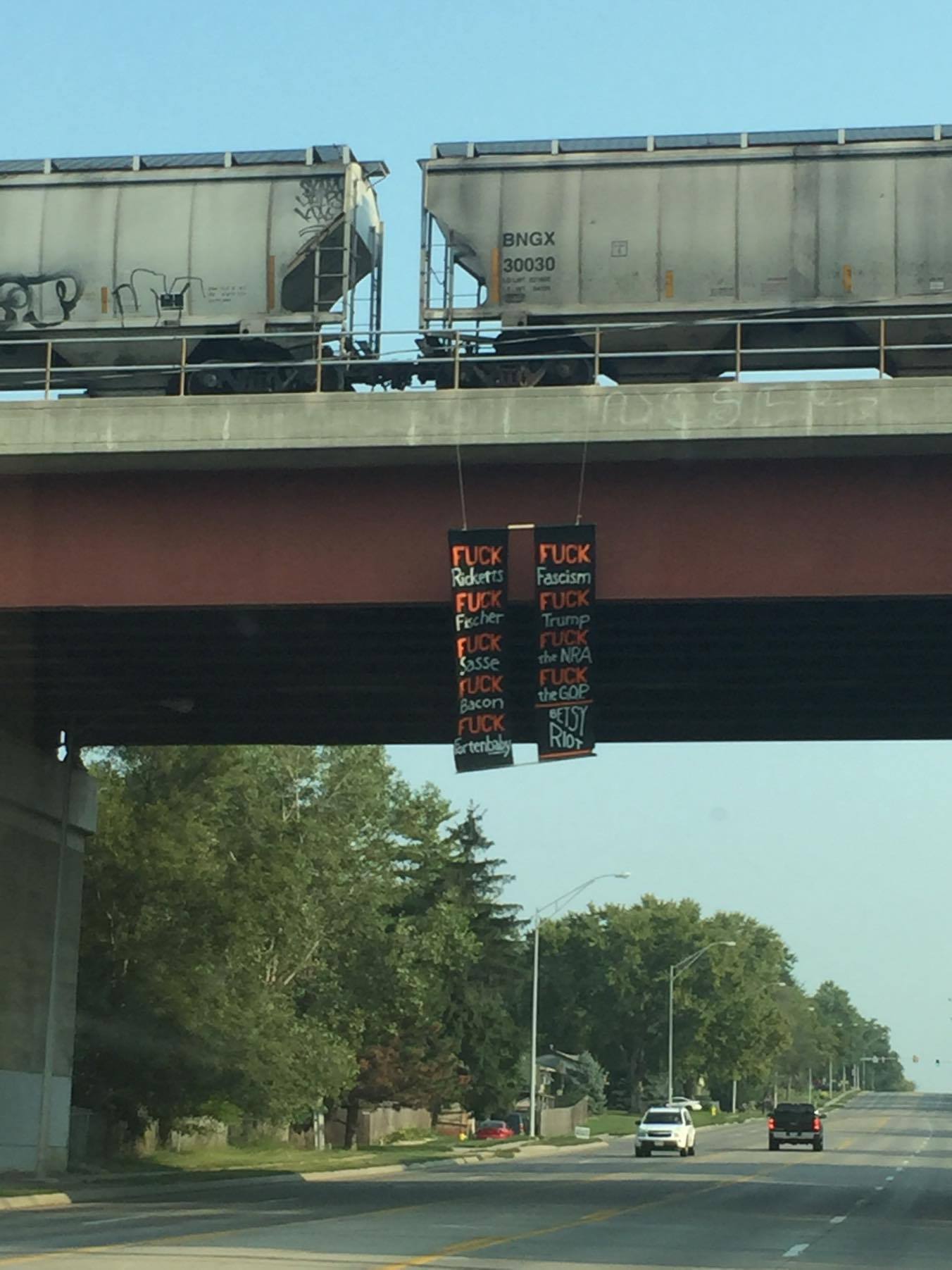 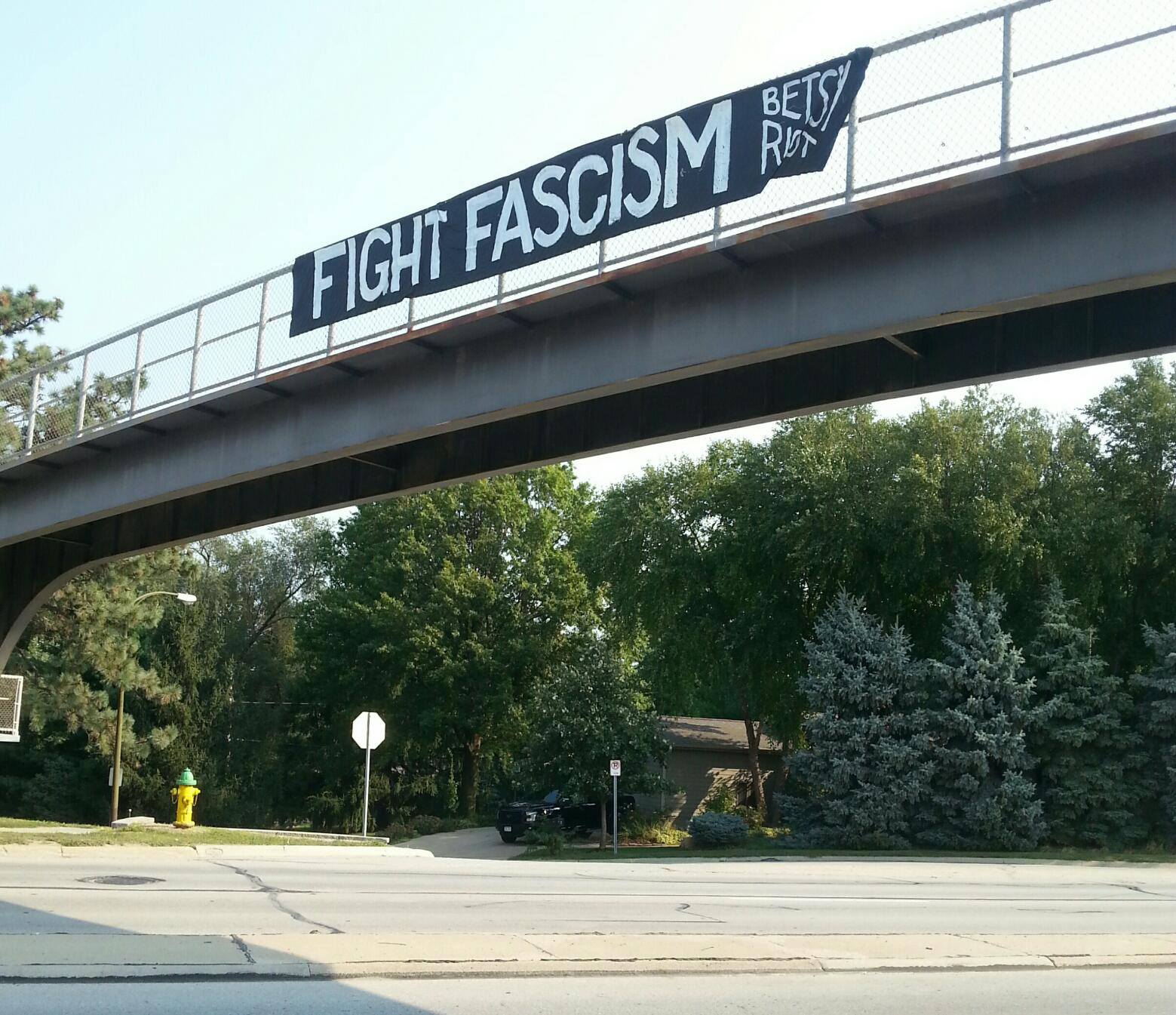 Lincoln, Nebraska.
NO KKK
NO NRA
NO NEO-NAZI

The Senate’s Fuck America Healthcare Bill is dead, at least until our “leaders” cook up another grotesque way to feast on the pain and suffering of Americans. Nebraska Betsy wanted to remind Senator Deb Fischer’s constituents that if they manage to keep their healthcare it’s no thanks to the gruesome appetites of Senator Fischer, who has never met a non-millionaire constituent whose blood she doesn’t want to suck into her ghastly gullet. Betsy dropped this banner over a popular jogging path. 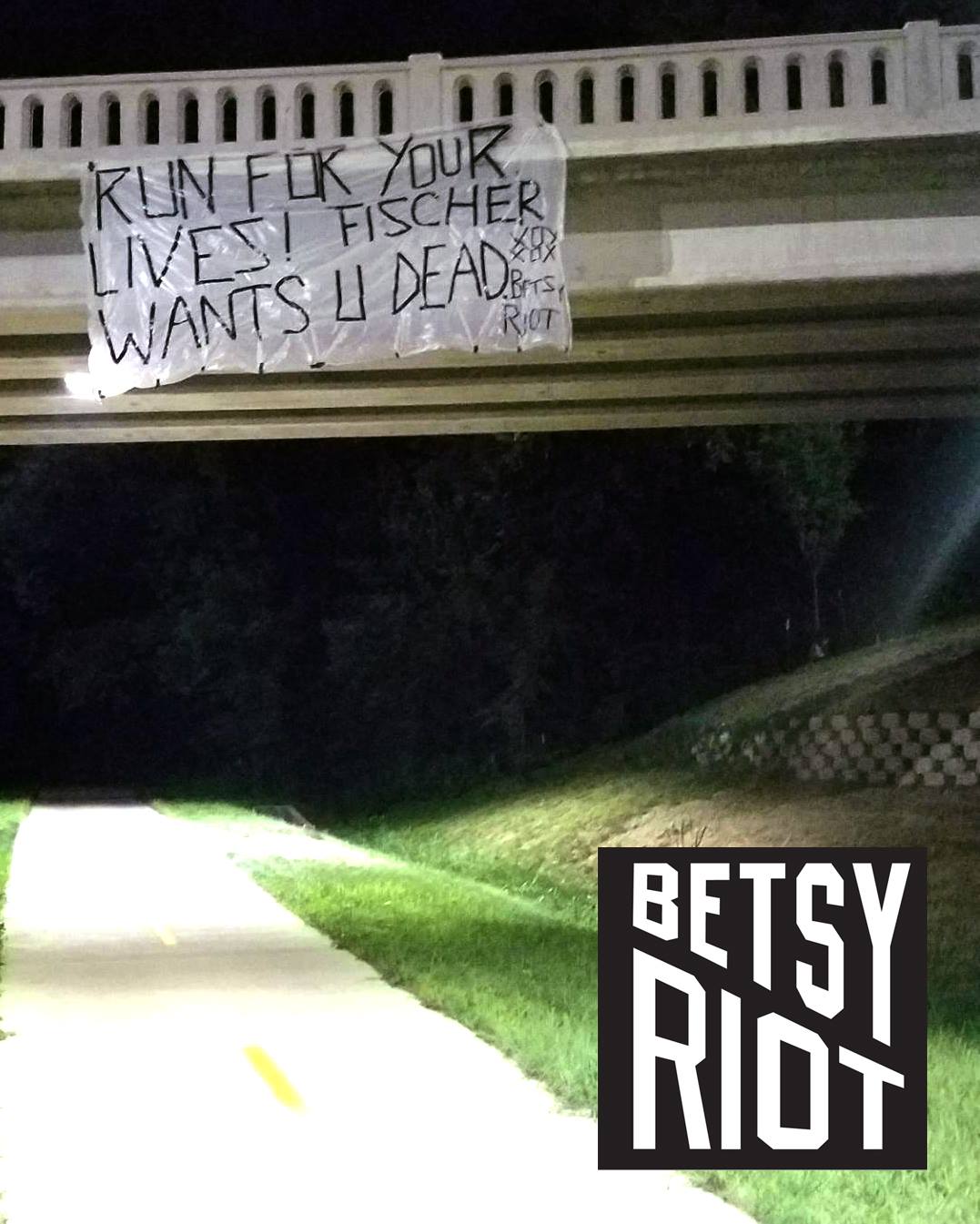 This may be Betsy’s favorite action yet.

Imagine you are Nebraska’s Governor Pete Ricketts. After a hard legislative session, in which you bought seats in the legislature using your personal wealth and slashed funding to the elderly and disabled children, you go on a feel-good tour through the deep red part of the state, where the very people you fuck over every day will come out to heil you because you make them feel really special for being white even as their disabled kidsget no more services because of you and their elderly parents will have to be moved to a home six hours away.

You’ve learned to keep a low profile in the urban areas because you never know when Betsy will humiliate you over dinner or scare you with mean words on aprons outside your office. But McCook, Nebraska? McCook, population 7,000 and hours and hours from the nearest town big enough for a parking garage? You’ll be safe there, you think to yourself as you pull the wings off a butterfly for fun.

But wait, what’s this you see upon leaving your sausagewank? It’s the BETSY RIOT. In McCook, Nebraska, standing up to say FUCK FASCISM in smalltown Trump Country. She has found you, you piece of sadistic oligarch shit. Big Betsy is watching. 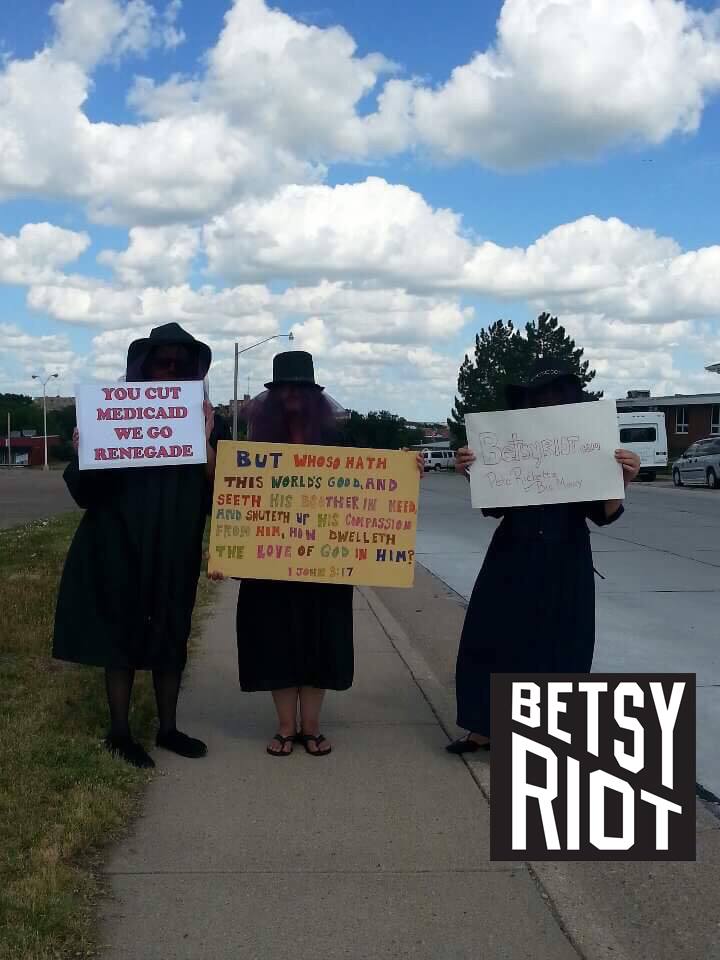 The NCAA World’s Series of Men’s College Baseball is an annual event at the TD Ameritrade Center in Omaha. Two of the teams this year were LSU and Florida. Betsy was there.

Because both Louisiana and Florida have such stellar records in NRA-crafted gun laws that literally encourage gun violence (results don’t lie!); and because Rep. Steve Scalise, the badly injured Congressional baseball practice gunshot victim, has such a robust history of shilling for the NRA–the Nebraska betsies decided the NCAA World Series of Men’s College Baseball might be a good venue to offer helpful reminders about the way the NRA has fucked up our most beloved national pastime.

(PS: a female police officer showed up and questioned the Nebraska 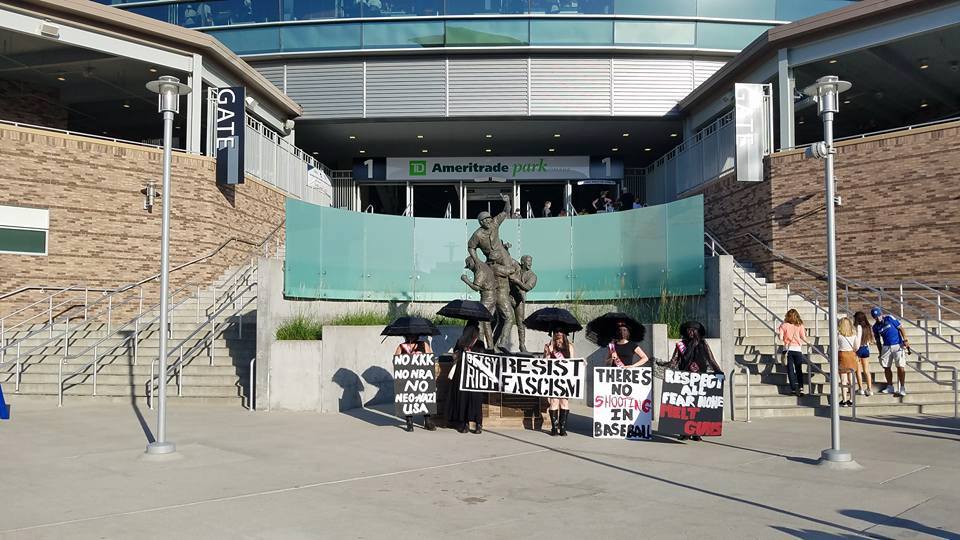 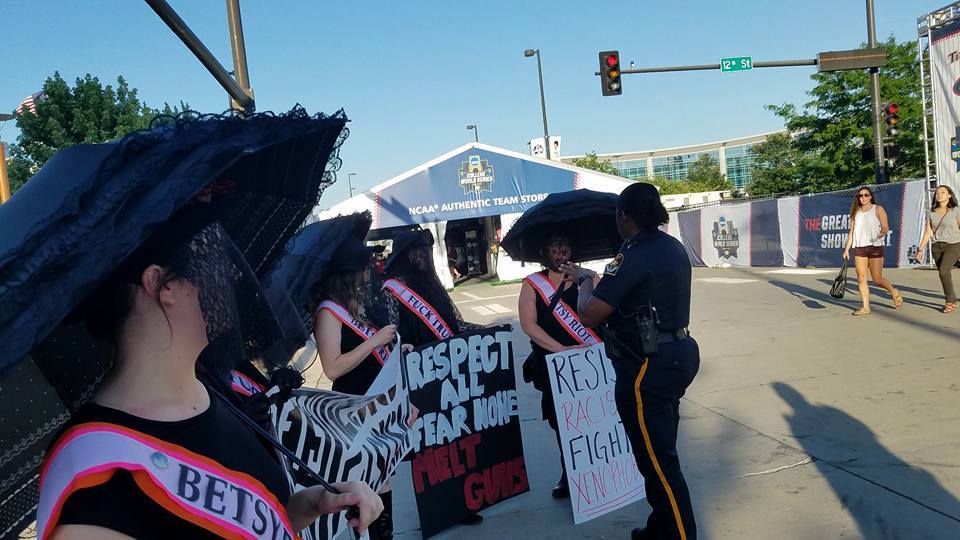 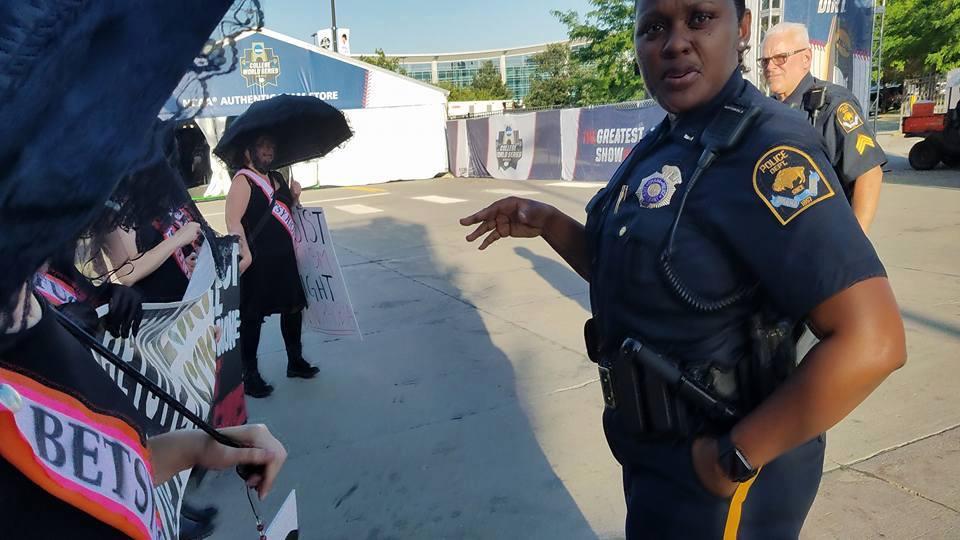 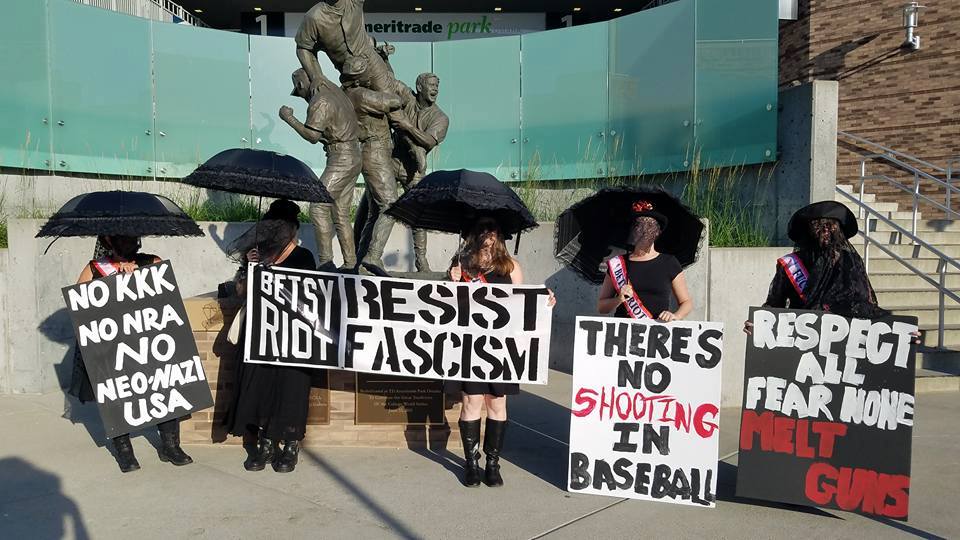 betsies. “We’re national, non-violence, punk patriots and neo-suffragettes! You can find us online!” the betsies told her. “Cool!” said the officer. And then she took a group photo for them.) 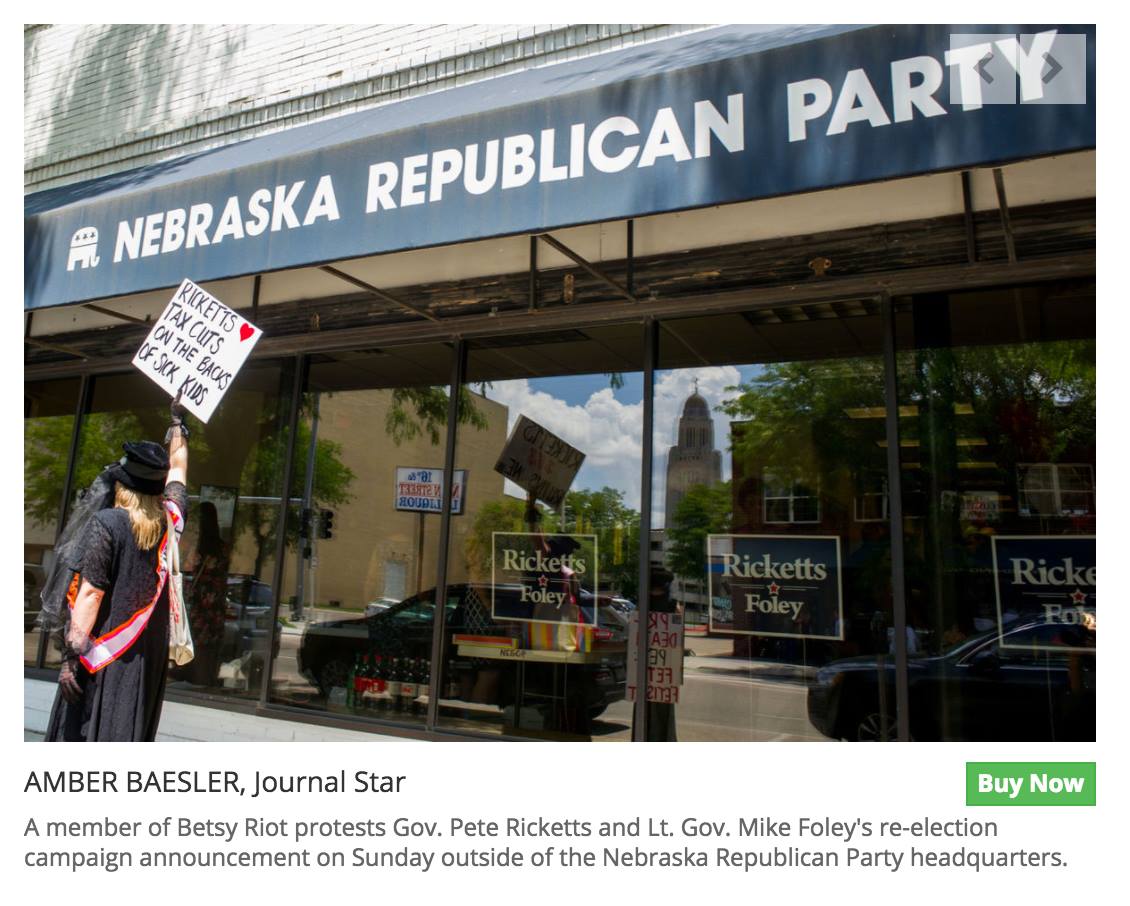 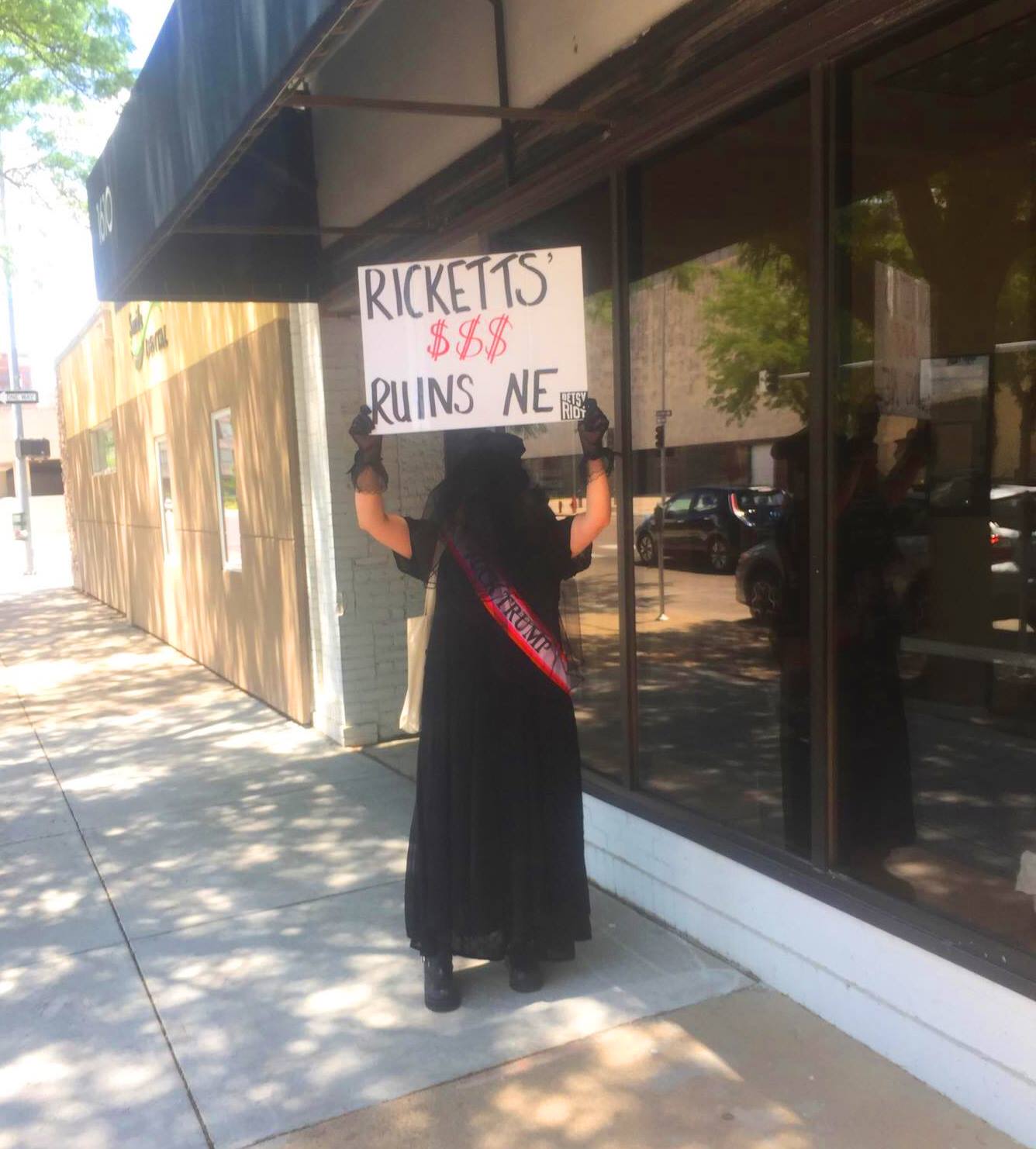 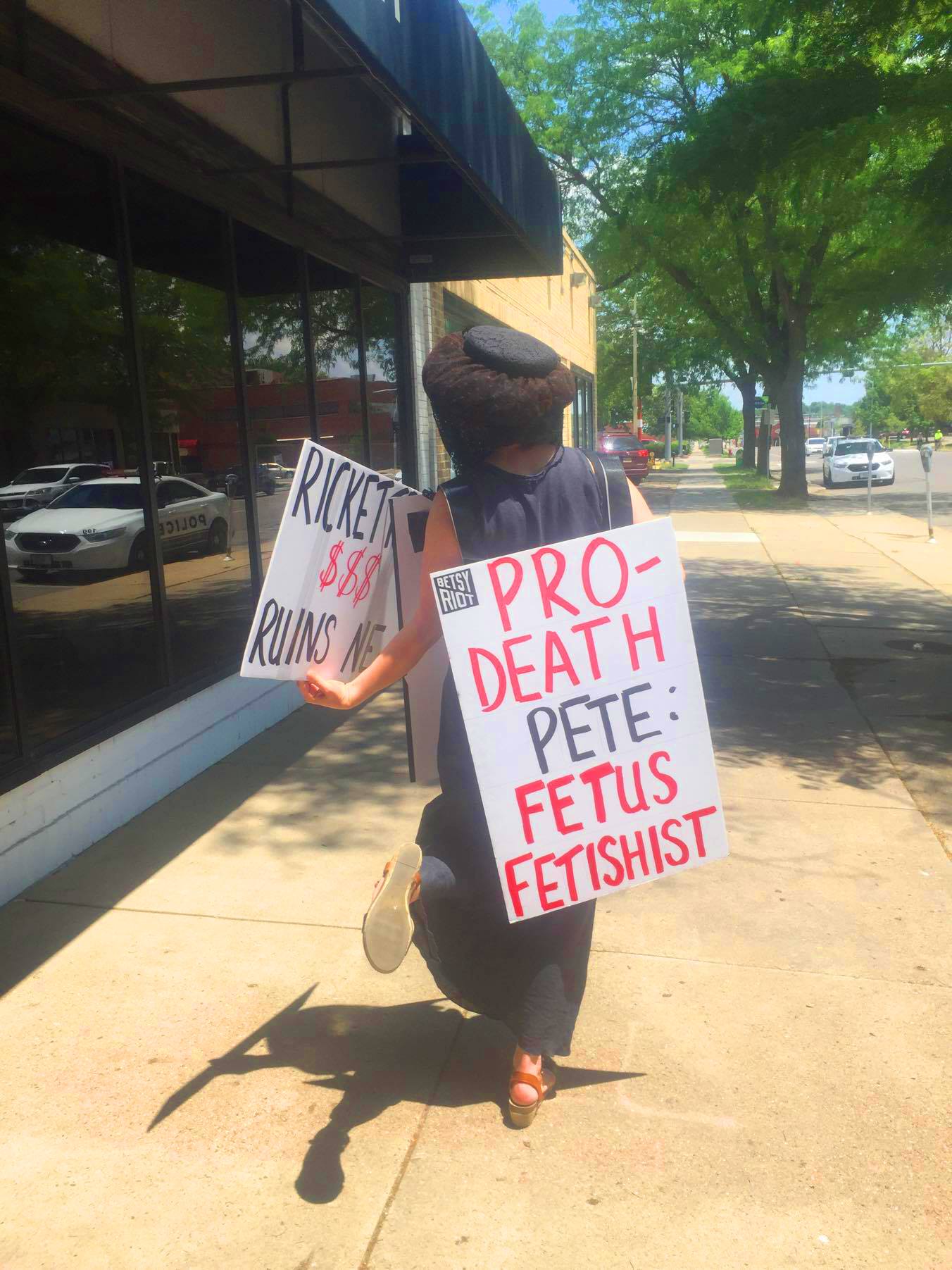 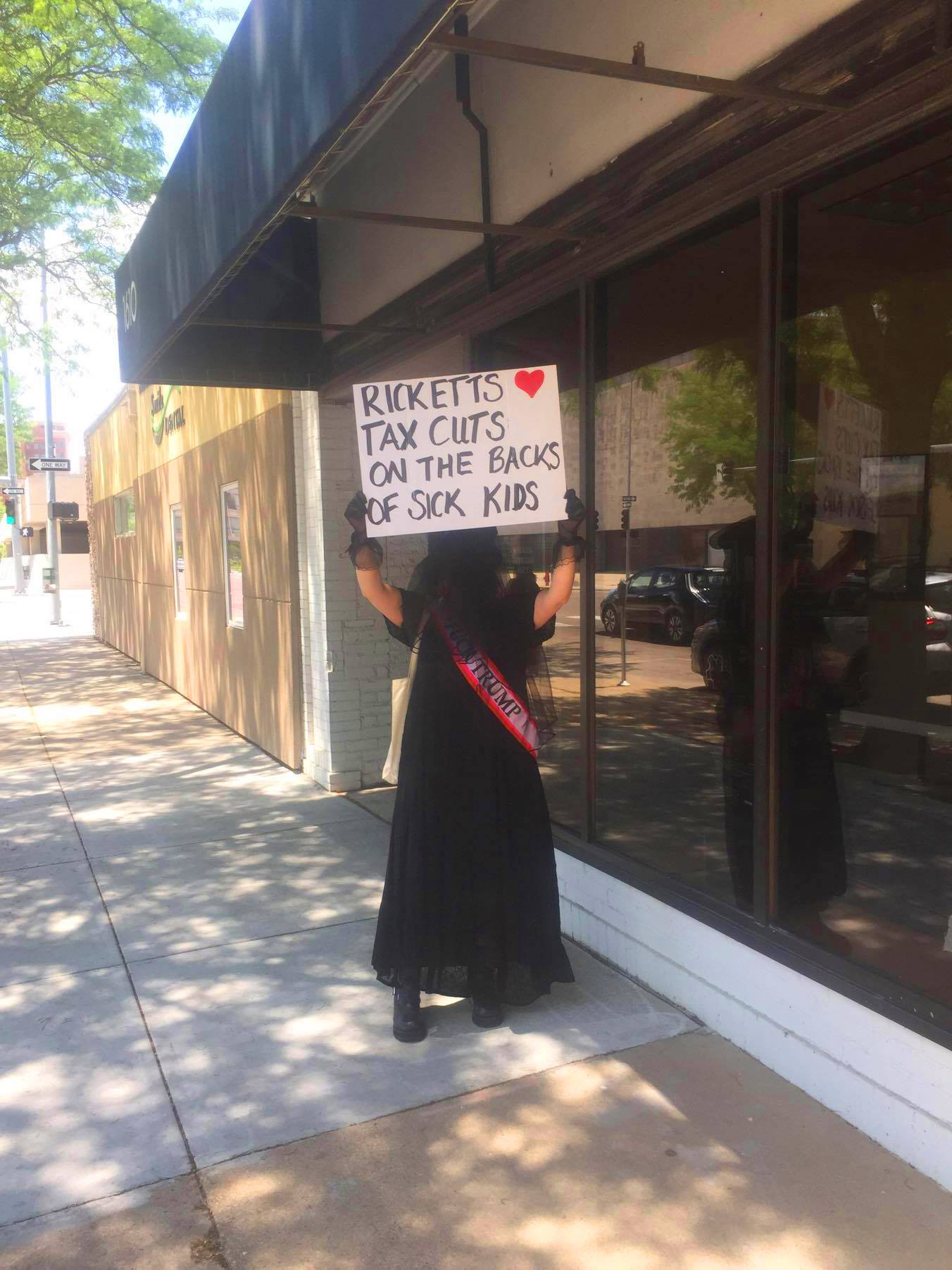